The Build A Bigger Life podcast with Adam Carroll is a show about entrepreneurs, innovation, pursuing freedom, and creating a life of abundance and meaning. 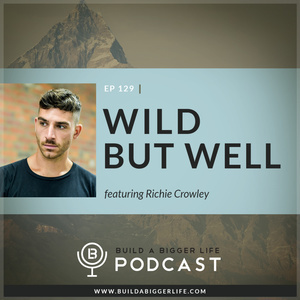 An Ivy league educated, former professional athlete, Richie lives a life of positive rebellion. When his peers graduated, swapping caps and gowns for shirts and ties, Richie moved to Europe. He spent the next 3 years living in France (French National Champion) and Italy playing professional Ice Hockey, his final season as a member of the Italian National Team. This wasn’t his first experience competing at an international level. Richie was the captain of the United States National Ice Hockey Under-18 Team for two seasons (2x IIHF Gold Medalist, 3x IIHF Silver Medalist) prior to attending Brown University (2x ECAC Finalist) of the Ivy League, where he graduated with a Bachelor's Degree in Economics and a Bachelor's Degree Political Science, focused on International and Comparative Politics.

In 2016, at the end of his athletic career, Richie began life as a serial social entrepreneur. He has since founded 2 companies (Wild But Well, RICKiRICKi), toured as a corporate speaker, published works of poetry and writing, and appeared on 10+ podcasts. He continues to receive praise as a brand strategist, creative director, and idea generator, all the while emerging as a wellness activist working with business executives and Grammy-nominated recording artists. Richie advocates for an updated definition of wellness. One that includes: movement, stress, routine, habits, sleep, happiness, financial stability, relationships and food. He speaks with the spirit of alliance, and believes we can all update our defaults and unlock our greater self.